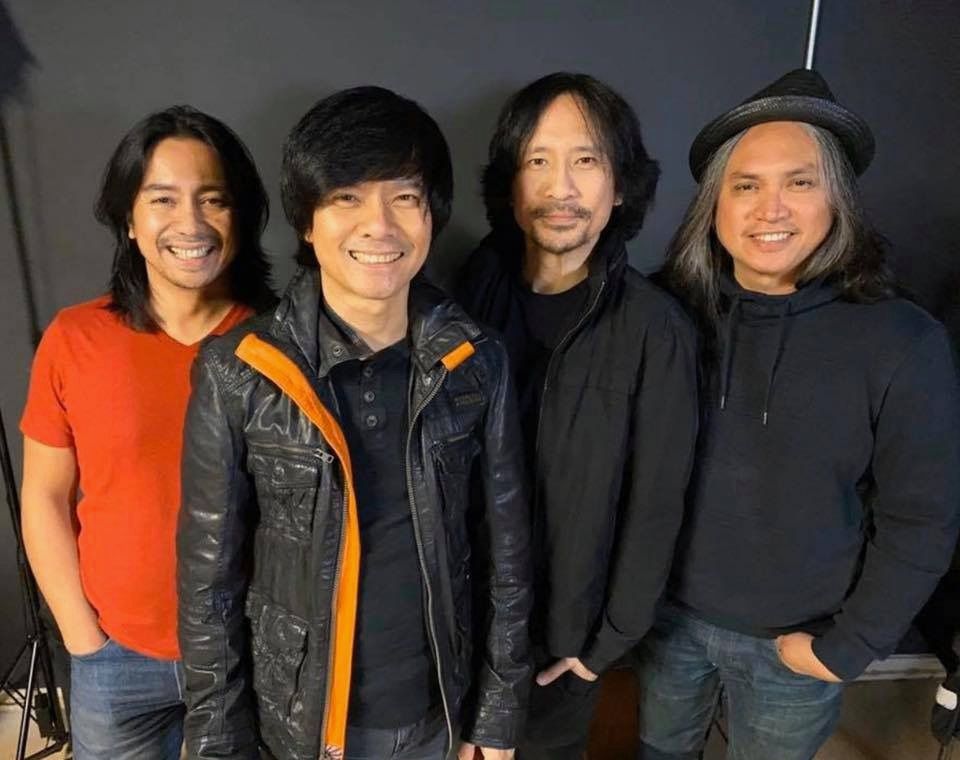 INTRoVOYS, is a Los Angeles based Fil-Am rock band with musical roots originating from Manila, Philippines.  The band broke out into the Filipino mainstream market back in 1992 with the hit singles "Kaibigan", "Maynila", "Calling All Nations" and "However Whichway" all found on their best selling debut album, Back to the Roots.

Their second and third albums generated many number 1 singles leading the media and their fans to call the quintet the "Number One Band In the Land".  Songs like "Will I Survive", "Kailanman", "Di Na Ko Aasa Pa", "Stay" and "Line to Heaven" have found their ways into the hearts of many and have remained relevant up to this day.

In 2005, the boys in the band decided to move to Los Angeles to live a more quiet life.  But music always found its way back to its maker and so that same year, the boys released the album, A Brighter Day, which gave their fans the hits "Desire" and "A Brighter Day".

A tour of the East & West Coast created an awakening in the band's fan base, whilst creating a new breed of INTRoVOYS True Fans.

Beginning in June of 2013, INTRoVOYS embarked on a successful, well attended 16 month tour of different Cities, States and Provinces in the US and Canada.

Today, 2020, INTRoVOYS is getting ready to go back on road to reconnect with its True Fans and promote their much awaited album, Where We Left Off.

Robin Nievera is a singer/songwriter, composer, & musical producer hailing from Manila, Philippines. At the tender age of 12, a young Robin started honing his craft; he learned to play the guitar and started to write music. When listening to Robin one can tell he plays heavy homage to his influences. His riffs, melodies, and lyrics are peppered with inspiration from Incubus, Dave Mathews Band, John Mayer and Bon Iver.

From his debut album, Overwait, Robin released 2 singles. "In 3's", was released in April, and the music video hit the “top 20 MYX Philippines Countdown” for 9 consecutive weeks. The 2nd single "Smile" is currently on the "Magic 89.9 top 30" charts.

Robin and his band opened for Hanson's "Shout it Out" world tour early 2012. Their next big show came in September of 2012, when Robin and his band performed at the "Bazooka Rocks" Festival. The festival featured some of the biggest pop/punk bands today such as Mayday Parade, Marianas Trench, The Pretty Reckless.

Robin also produced Martin Nievera and Pops Fernandez's 2012 duet album, "No More Words", for their US/Canadian tour. His song "Smile" was included in the album, and is also featured in Regine Velasquez's album - "Fantasy" .

RIVERMAYA, is a Filipino rock band. Formed in 1994, it is one of the several bands who spearheaded the 1990's Philippines alternative rock explosion. Rivermaya is currently composed of original members Mark Escueta and Nathan Azarcon, together with Mike Elgar. Former original members include Rico Blanco, who had been the original songwriter of the band, guitarist Perf De Castro and vocalist Bamboo Manalac, who later formed the band Bamboo and later went on his solo career. Rivermaya is listed in the top twenty-five biggest selling artists/act in the Philippines as of present.

David Aguirre remembers being drawn to rock n’ roll at a very young age. “It seemed like nothing quite gave me that same rush. My mind, body and spirit seemed to respond to this sound like nothing else at that point in life,” he says. “I always like to say that I pretty much existed in black and white until I heard Elvis Presley for the first time and only then did life start having color. I was also very lucky to have a mother with great musical tastes, who introduced me to everything from 50’s DooWop and early rock n’ roll to classic ‘60s, ‘70s psychedelic rock.”

According to Aguirre, it was Jimmy Page that made him want to play guitar. “He’ll always be my main hero. However, in the early days of the band, we shared ‘residency’ with Cocojam at the legendary Kalye bar for almost 5 solid years, giving us the opportunity to watch, experience, and learn from such seasoned Pinoy rock greats like Edmond Fortuno, Rico Velez, Rolly Maligad, and most importantly, blues shredder Jun Lopito, who is pretty much my all-time hometown hero, right up there with Page. I must’ve learned more from just watching Jun play than from anywhere else,” says Aguirre. “Juan De La Cruz also made a huge im­pact on us as a band. Pepe, Wally and Mike are defi­nitely to thank for our deep passion in Pinoy rock,” adds Aguirre.

Today, David Aguirre is living the quiet life in the United States. He moved to California in 2004, and currently resides in Orange County with his lovely wife and kids. He may not be as visible around these parts unlike during his heydays with Razorback but David Aguirre's rock and roll journey is far from over. He is recently with the band  named PINOY ROCK REVUE which was formed by former Rivemaya and current RockStallion guitarist Perfecto de Castro.  PINOY ROCK REVUE consist of former and current band members from Rivermaya, RockStallion, RazorBack, and INTRoVOYS.

Buhawi "Buwi" Meneses,  is a Filipino bassist for the band Parokya ni Edgar. Buwi is the second of the four children and only son of activist Danny Meneses and the late Rosa Francia-Meneses. He took Fine Arts at the University of the Philippines Diliman. Not long after, Buwi joined his childhood friends to form Parokya ni Edgar and pursue a music career.

He won the "Bassist of the Year" award at the NU Rock Award in 1999 and also wrote the top seller Parokya ni Edgar song "Mr. Suave" in their 2003 album entitled "Bigotilyo"

GLENN JACINTO is a Filipino musician/songwriter, currently based in Los Angeles, California.He is widely known as the frontman of the pinoy 90s rock alternative band, Teeth, popularly known for the hits "Laklak", "Prinsesa", "Tampo", "Shooting Star", and much much more

Glenn moved to the US in 2000, there he found the thriving Filipino-American rock music scene called "Lokal Pinoy".  Glenn continued his musical career in the US and created his own name outside his band Teeth.  Glenn is now juggling both Teeth and his solo project and is set to release a solo debut album soon, both in the Philippines and in the US.

Perfecto "Perf" de Castro is a multi-awarded Filipino musician, currently focusing on Classical and Flamenco music played on the Ten-string guitar but perhaps best known for having been a celebrated fixture in the Philippine alternative rock scene during the 1990s. During the course of that decade, he was one of the original members of the alternative rock band Rivermaya, founded the band Triaxis, and also collaborated with the seminal Filipino rapper Francis Magalona and Filipino hard rock band Wolfgang.

His most notable awards as a musician include the 1998 Katha Award for Best Rock Instrumental Performance and Composition and the 1998 NU Rock Award for Guitarist of the Year. He is also widely recognized as a talented album producer and sound engineer, with his work including the multi-platinum albums of Wolfgang (“Semenelin”) Francis M (FreeMan and FreeMan II) and Marc Velasco (eponymous). For this he received numerous accolades, including the Producer of the Year Award in the 1998 NU 107 Rock Awards and the 2001 Awit Award for Best Rap Recording for a song done in collaboration with Magalona.

In 2004, de Castro relocated to Los Angeles, CA where he continues to record, perform and teach different guitar.

On January 9, 2016, he re-united with his former Rivermaya co-members, Nathan Azarcon, Mark Escueta and Rico Blanco for a "secret mini semi-reunion", following his gig at 19 East, Taguig City.

HYA', is a young artist who goes to Oakland School for the Arts, She was a member of the renowned and five-time grammy award winning San Francisco Girls Chorus.  Won a National High School acappella sing off competition at Bend, Oregon.  In 2017, when she was in Encore, the advanced middle school acapella ensemble at Oakland School of the Arts.

Her career as a singer was launched during the Morrisette, INTRoVOYS & HBOM On the Go Concert in San Francisco last May 12, 2019. As she performs for the first time in front of a 1,500 capacity crowd. The crowd was amazed of her mesmerising voice, which she owes it to her voice coach, the timeless diva Ms. Miriam Pantig.

RockStallion's  sound is anchored around virtuoso guitarist and DiMarzio artist Perfecto De Castro's expansive guitar style that encompasses both soulful and Bluesy classic rock and modern flashy, face-melting shred. Matching the guitar fireworks is frontman Raffy Mendoza's soaring vocals that's reminiscent of a grittier Steve Perry with a shot of Bon Scott. Laying the foundation for all the guitar and vocal pyrotechnics are Marc Yap's grinding bass grooves and the thundering drums of John Medina. All members of RockStallion are seasoned professional musicians having toured around the world and performed with Rock Stars such as Arnel Pineda (Journey) and Bret Michaels (Poison).